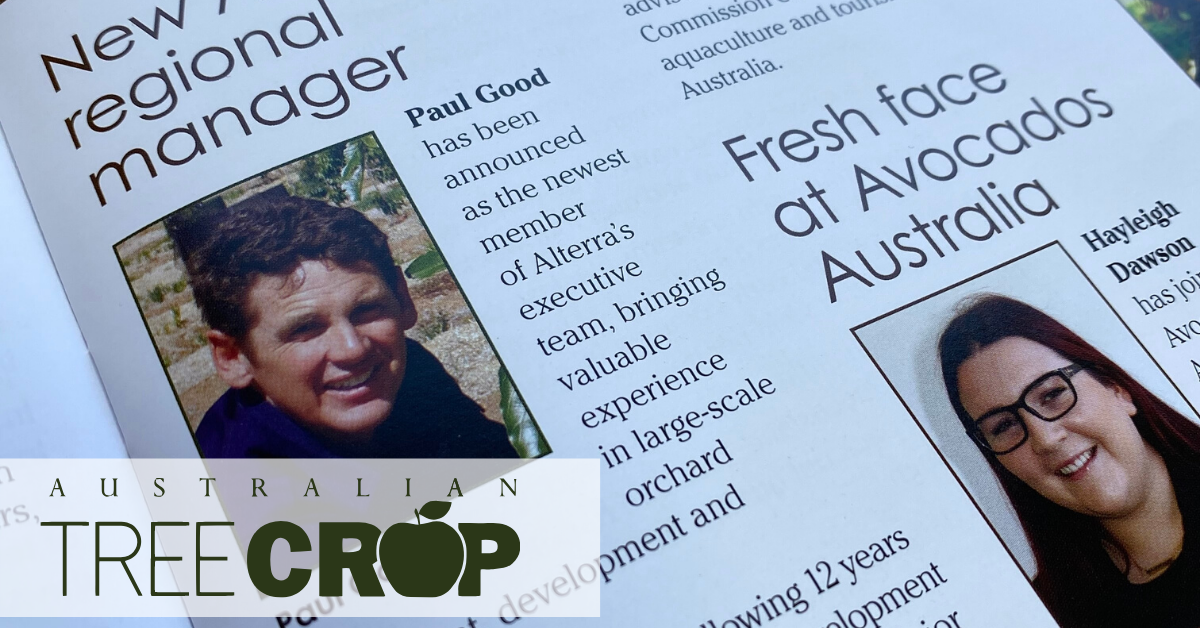 After 12 years as Operations and Business Development Manager at Newton Orchards, Mr Good will assist Alterra in advancing its pipeline of avocado development opportunities – starting with the 300-hectare Carpenters Project in Pemberton.

While at Newton Orchards, Mr Good oversaw the diversification into avocado production, which included a 90-hectare avocado and apple property in conjunction with investors.

Mr Good is featured alongside Avocados Australia’s new Market Development Manager Hayleigh Dawson, a new role that is part of a push to increase domestic demand for the fruit.

“We want that work to be as effective as possible in ramping up consumption of Australian avocados in our domestic market,” Avocados Australia CEO John Tyas told Australian Tree Crop.

Avocado demand in Australia has continued to rise with estimated farm-gate prices paid to farmers in Pemberton from the most recent harvest (September 2019 to January 2020) ranging from $5.44 â€“$9.38 per kilogram.

With approximately 2,500 hectares of current avocado production in Western Australia, Alterra’s Pemberton project has the potential to represent about 10 per cent of WAâ€™s planted hectares, with positive pre-feasibility results providing Alterra with a basis to pursue development.

With a rising consumer appetite for healthy foods, global demand for avocados has skyrocketed over the past 10 years. Currently Australia exports only around 3 per cent of its total avocado crop with significant potential to grow exports into the future, particularly from this unique production area of Pemberton.

Alterra has signed agreements with two local avocado producers in the South West of Western Australia, French’s Group and Richard Eckersley. These partners have offered access to their production data and horticultural expertise, which has been built up through multiple generations of family farming.

This expertise is already paying dividends for Alterra in optimising the development plans forÂ the CarpentersÂ Project. A â€œBest Practiseâ€ guide has been developed as a â€œblueprintâ€ for Alterra to maximise yields, optimise quality, control costs and ultimately ensure the project is a low-cost producer.

This aligns with Alterraâ€™s strategy to export fruit into global markets as Australian production of avocados continues to grow.